Monday, October 29:  After our morning of birdwatching, we each have an hour-long massage in the massage hut. It’s wonderfully relaxing, except for the deep tissue kneading the masseuse does on my calves.  They feel bruised and beaten after all is said and done.

the massage hut at Bishangari Lodge

Behind this door lies a great massage!

our masseuse doubles duty as a waitress

After our massages, we take another walk along the lakeshore, where we see a couple of scary-looking birds that appear to be right out of some prehistoric age.  They’re Abyssinian ground hornbills, and they don’t seem frightened of us at all.  They just strut their stuff confidently under the acacia trees and across the pumice rock. 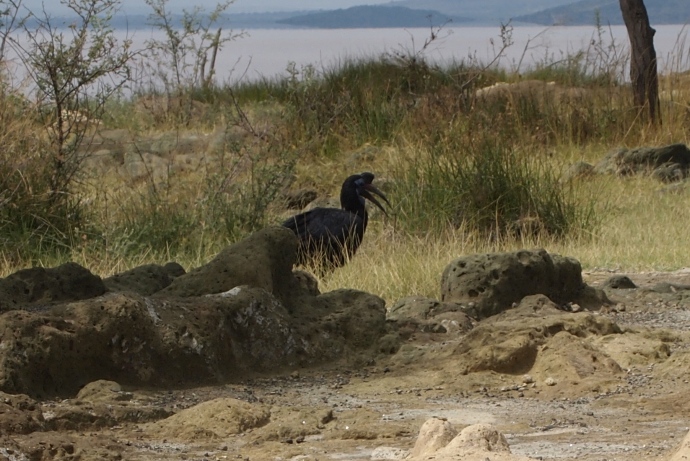 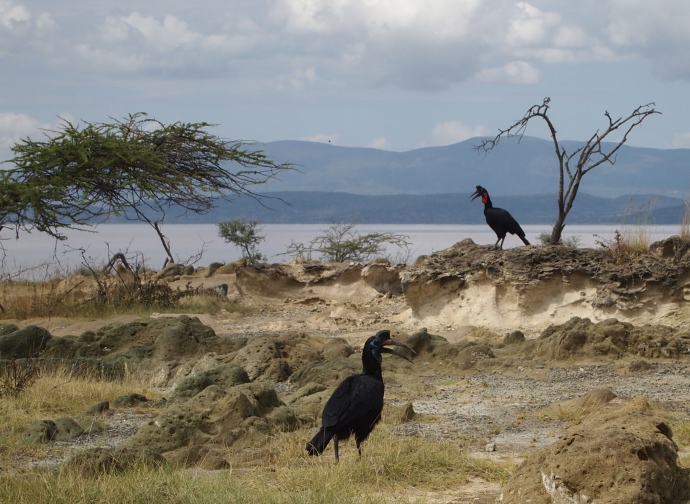 While the strange black birds strut around like they own the land, a yellow-billed stork sits quietly on the lakeshore.

And we see a companionable little group of spur-winged plovers and Senegal thick-knees relaxing on the pumice stones. 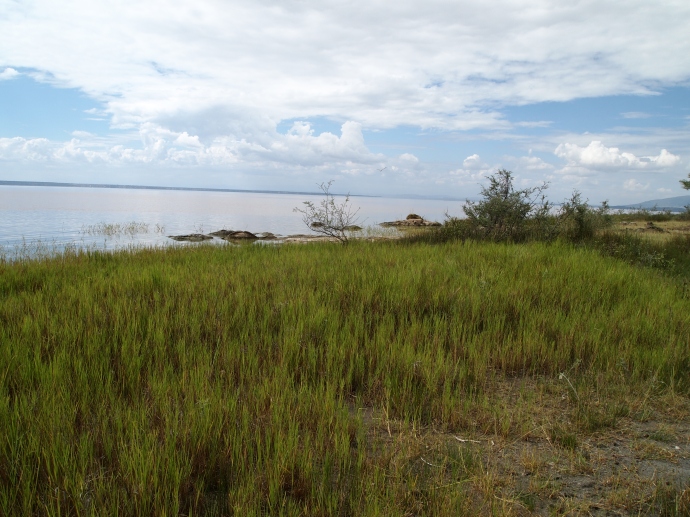 grassy land beside the lake

As we stroll back through the forest toward our cabin, we hear leaves rustling overhead and find some elusive black & white Colobus monkeys darting about through the branches.  This one sits still just long enough for us to capture a blurry image of him on camera. 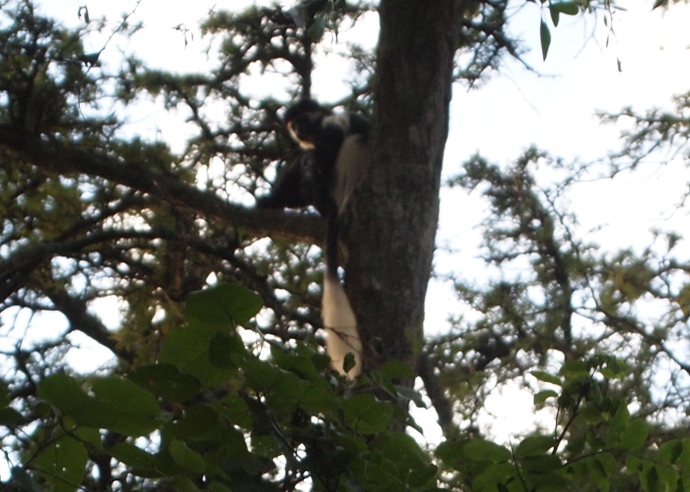 Colobus monkey in the forest

And later still, as I swing on the hammock by the lake, this black bird comes into the branches directly overhead.  I’m not sure what he is, but he’s possibly a Northern black flycatcher or a fork-tailed drongo.  I don’t know about the forked tail though, as his tail doesn’t look very forked to me.

Northern black flycatcher or fork-tailed drongo? Not sure… 🙂

Here at Lake Langano is the first time I have ever done any birdwatching, and I find it quite fascinating, especially as Ed knows his birds and has a book about birds of Ethiopia.  I love being out in nature at this place along Lake Langano.

what I’ve mused about…

A German Expat's Life in Fredericksburg/Texas

inspired by the colours of the land, sea and sky of Cornwall

Let Me Bite That

Can I have a bite?

exploring New York City one adventure at a time

The World according to Dina

Notes on Seeing, Reading & Writing, Living & Loving in The North

Potato Point and beyond

A blog full of humorous and poignant observations.

The Eye of a Thieving Magpie

My view of this wonderful and crazy life - as I travel and explore.

From London to New York, living in an expat daze

Photography is a constant travel to new places

Never cease to explore and tell!

Insanity at its best!

Travels in the Middle East and beyond

"Wherever you go, go with all your heart " Confucius.

The Art and Craft of Blogging

Looking for meanings in words, images and sounds

Beth and Joe enjoy simple and active travel – every day of the year. They started their trip in 2012 and are still slowly traveling the world.

The Sophomore Slump
Footprints Around The Globe
TRAVEL WORDS

Adventures and Postcards from the road

Mostly photographs with some words by this arty scientist...

Roaming, at home and abroad

Come away with the raggle taggle gypsy-o

Adventures at home and abroad

the breezes at dawn have secrets to tell you... ~ Rumi